Possessed of a voice that writer Robert Christgau likened to “An Afro-American air raid siren,” Jerry “Swamp Dogg” Williams is as underappreciated and misunderstood as he is irreverent and irrepressible. Having hovered in and around the margins of America’s musical underground for his entire career, the Dogg’s lamentable tendency for “Buzzard Luck,” as his song so memorably once put it, also happens to be his greatest strength: he refuses to be pigeonholed, is virtually impossible to dilute, and simply cannot be taken sitting down. He is the type of artist who causes commercially-minded A&R men to throw their arms up in sheer frustration and despair. This bristling musical activist didn’t start out this way; he recorded prolifically during the sixties as Little Jerry Williams, helped organize the famed Muscle Shoals horn section and wrote songs and produced records for Irma Thomas, Z.Z. Hill and Doris Duke, to name just a few.

But some time around the apex of the Vietnam War something within him cracked. By 1970 this self-proclaimed “Ph.D. in Niggerism” was mad as hell, and he wasn’t going to take it any more. That year he released Total Destruction of Your Mind under his newly adopted canine moniker and the next two years brought Rat On and Cuffed, Collared and Tagged. The Dogg had arrived and America’s musical landscape would never be the same. Here was a soul philosopher who not only rhapsodized about the mysteries of love and the temptations of cheating, but had a bullshit detector built into his brain — set to red alert at all times — that drove him to confront hypocrisies head-on. The rare artist who can bring his audience from laughter to tears and back again in a single sitting, Swamp Dogg’s one-of-a-kind brand of socially-conscious country soul practically defies description. FBI Director J. Edgar Hoover even took note, tapping his phone line and adding him to his secret list of citizens involved in “Un-American” activities. Here then, are two of his most cripplingly beautiful performances, two critiques of our country that sadly ring as timelessly true today as they did when he first recorded them forty years ago. “Sam Stone,” the brutal tale of the tragic life and death of a returning war veteran, is one of those songs that appear to have been lost in the wilderness shortly after its creation, just waiting for the artist it was destined for to come along and discover it. Written and originally recorded by John Prine, for “Sam Stone” Swamp Dogg was just that artist. Prine’s lyrics are disturbingly, ingeniously graphic – in fact, it’s safe to say that it would be impossible to write a song on this subject as darkly effective as this one – and their brilliance is only matched by the Dogg’s heart-breaking delivery, giving it the voice and gravitas it longed for. 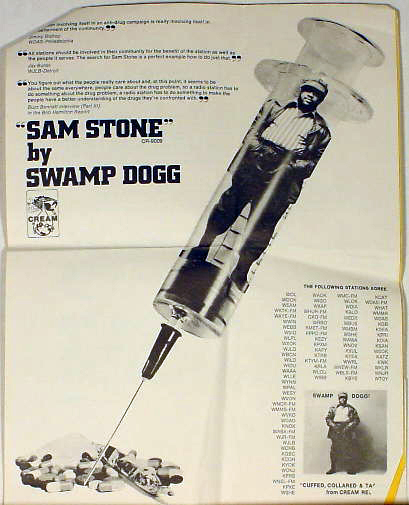 Torn from the same page of frank and unnerving truth-telling comes “God Bless America For What?,” this time from Swamp Dogg’s own pen. Although recorded before “Sam Stone,” it seems almost descended from it, making its point from a sweeping historical perspective rather than a personal one. With “God Bless America (For What)?,” he tackles the conditions that led to the unraveling and eventual demise of Sam Stone and countless others like him, entreating his audience to unite across color and religious divides to help reconcile the country’s glaring inequities with its founding promises of individual freedoms and justice for all. Now, without further ado, let the Dogg bring you what he promised from the very beginning: Total Destruction of Your Mind.

The Ponderosa Stomp is proud to present Swamp Dogg performing in New York at Lincoln Center on August 12th, 2012 at 6pm.

Perhaps the only post-apocalyptic deep soul song ever- brilliantly re-interpreted by Swamp Dogg. “The soul genius that time forgot” will be performing October 4th, 2013 at the Ponderosa Stomp. Swamp Dogg – The World Beyond

Above: The Lewis Sisters- Rose, left, and Margaret, right, with Dale Hawkins on stage at the Louisiana Hayride. “In April 1957 Margaret Lewis won 2nd prize at a talent show in Plainview, sponsored by Johnny Horton, the prize being a guest appearance at the Louisiana Hayride at Shreveport. There, Johnny and Tilman Franks introduced her … END_OF_DOCUMENT_TOKEN_TO_BE_REPLACED

From the Cradle to the Blues – one of Margaret Lewis’ slow burning classics from her RAM sides. Come see this queen of rockabilly and country soul perform and reflect on her storied career with music writer Michael Hurtt this Tuesday July 17th, 2012 at 6 p.m. at the Old Mint, 400 Esplanade Ave, New … END_OF_DOCUMENT_TOKEN_TO_BE_REPLACED