From the New York Times:
Al Bell: Out of Exile, Back in Soulsville
By Deborah Sontag 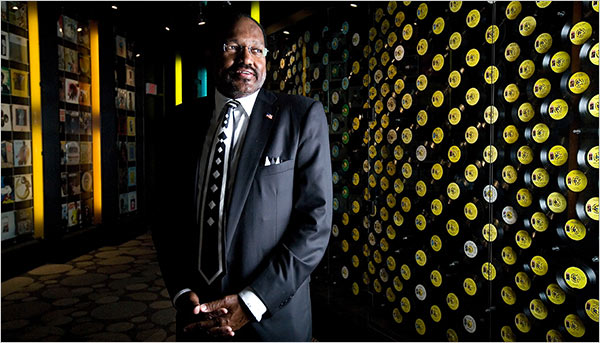 As the peacock-blue Cadillac with the gold trim and fur lining spun on a giant turntable in the Stax Museum of American Soul Music here, Al Bell, the final owner of the late, great record label, chuckled. Decades before 50 Cent with his customized Rolls-Royce and Akon with his tricked-out Lamborghini, there was Isaac Hayes with this pimped-out ride, an over-the-top gift from Stax to its over-the-top star, who wore slave chains like emancipatory bling across his bare, buff chest.

“The reason I chuckle is because I think of what has been born out of the rap and the hip-hop world, and then I look at what we were doing back then, and, you know, we were really ahead of our time,” Mr. Bell said.

His chuckle is rueful, though. When Mr. Bell, 69, stands by that revolving Cadillac, he sees the arc of his life come full circle, unexpectedly. The original Stax Records is long gone, Mr. Hayes and many other Stax artists, from Otis Redding to Rufus Thomas, have died, and, until recently, Memphis showed little interest in reclaiming or building on its soul-music heritage. Six years ago, though, the Stax Museum opened. And earlier this summer Mr. Bell was invited back to Memphis with a bittersweet mandate: to resuscitate the city’s once great music industry as chairman of the Memphis Music Foundation.

Go here for the rest of the article.

From today’s New York Times: Les Paul, Guitar Innovator, Dies at 94 By John Pareles In 1940 or 1941 — the exact date is unknown — Mr. Paul made his guitar breakthrough. Seeking to create electronically sustained notes on the guitar, he attached strings and two pickups to a wooden board with a guitar neck. … END_OF_DOCUMENT_TOKEN_TO_BE_REPLACED

Were you able to hoof your way to New York last month when Roy Loney and Cyril Jordan of the San Francisco-based face-meltingly fantastic rock group the Flamin Groovies — backed by the ever-capable A-Bones — reprised their appearance at the 8th annual Ponderosa Stomp with a pair of gigs at Maxwell’s and Southpaw? The … END_OF_DOCUMENT_TOKEN_TO_BE_REPLACED

Before the event got underway, the New York Post weighed in with a lengthy preview. David Fricke, in Rolling Stone: “The third night of the inaugural Lincoln Center edition of the Ponderosa Stomp — the annual spring resurrection of forgotten roots-rock and R&B heroes and heroines, founded and held in New Orleans — was … END_OF_DOCUMENT_TOKEN_TO_BE_REPLACED